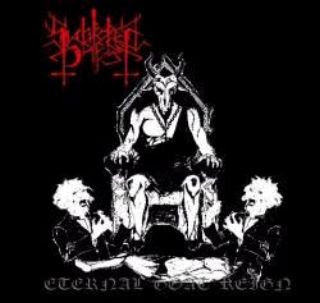 (in their more straight-forward thrash moments),Slaughtered Priest bring to you “Eternal Goat Reign”.

Hellhammer derived circular black/thrash riffs, gurgling basslines, surprisingly tight drumming and awfully awesome vocals are just some of the main features of this band's debut album. Just like early Bathory and Venom, you can spot some punk influences here as well, mainly in the upbeat 'happy' drumming style. The blackened thrash riffs make up most of the guitar work here as there are no solos, but the riffs at times morph into full fledged black metal riffs with just a shade of thrash in them, and other times they take on a slow, somewhat groove metal appearance. The filthy Celtic Frost inspired guitar tone however gives the music an atmosphere of malevolence at all times. Vocals are here in the form of low death growls and thin - but not ultra high-pitched - black metal shouts.

There are six songs here from the total of eight tracks, the other two just being an intro and an outro. The song titles here are as awesome as the songs themselves, despite the blatant cheesiness. Despite the fact that both thrash metal and black metal are considered to be extremely restrictive genres, the music here never gets boring and feels peculiarly fresh throughout. Overall, this is a good first album for these Greek black metal thrashers and I look forward to hearing more original material from them!