Necroven, is a one man old school death metal project from Spain. Born to make music along the lines of  Grave, Abhorrence and Demigod, here's what Jonathan of Necroven had to say, in an exclusive interview with Nuclear Paradise, raw, and unedited.

NP: Hello from Nuclear Paradise! How are you doing?
Necroven: Hello!  Fine, resting after a nice working day.
NP: Take us through the early stages of the band……how did it all start?
Necroven: I needed a death metal band! I have been playing in other bands and projects with different styles but always I was thinking about to do something nearly of old death metal bands, I was working step by step to record the first demo and I think that the final product was great, I recorded all instruments and voice cause where I can from is too difficult to find people ready to play death metal but I'm happy and the people are interested, that's all that I want!.
NP:What would you highlight, as the greatest moment for Necroven, and why.
Necroven: Necroven is a really new project, but too much people is interested, now is a great time for Necroven cause I have a demo and an album to be released by labels with just 2 - 3 months of life as a band. I'm so grateful to the people that help me.
NP: What are your major influences, that got you started, and continue to shape your work?
Necroven: My influences are early death metal from USA, Sweden and Finland, all people said to me that Necroven sound is like early American bands but I think that the melodies the Necroven have are more near to the european sound, probably that's a mix,I don't know sure, I play all that I like when I'm doing a song, without care!, I listen some bands like,  Deteriorot, Rottrevore,  Abhorrence, Grave, Demigod, Entombed, Purtenance, Demilich, etc.
NP: If you could exist in any movement in musical history, which would it be?
Necroven:Death Metal, for sure! I can listen other kinds of music but death metal still being my favourite.
NP: Congrats on Being signed by Memento Mori. When can we expect the full-length record to release? 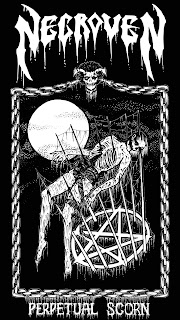 Necroven:Thank you! I'm so happy with the recent deal. I think that the album will be released the next year, I'm not sure but I'll be a true butchery! heheh for while I'm preparing all details for Perpetual Scorn demo released with Filthy Cave records soon.
NP: Tell us about your songs. What are they based upon? What are the major lyrical themes and inspirations?
Necroven: The lyrical theme isn't nothing new, about horror, gore, near-death experiences, sickness, witchcraft, possesions and those kind of wonderful things!
NP: Some final thoughts on Death metal. What do you think are the genres greatest strengths and weaknesses?
Necroven: I think that DM is a powerful genre right now, have too much bands and labels, so too much sometimes means too much shit also, but I think that a real good thing of death metal is the underground movement, bands, labels, zines with an old or vintage atmosphera in 2011, for me that's good, somebody that will be reading it could mean that I'm a 80's nostalgic but I'm not, just I think that this way keep death metal real...a really weak shit is the people that think like a rockstar playing death metal, and the shit-talkings...but this exist in all movements.
NP : What motivated you to get into metal? What according to you, made you stick to it?
Necroven: I started to listen heavy metal too young, I had 9 or 10 years old when I listen my first Iron Maiden album in a friend house, on vinyl, I think that was "The number of the beast", at first time I was paying my attention to the cover and other things in rock and roll music, I was a kid, but then, over time I being to listen that sound and pay attention to the music. I think that the things what made me stick to death metal is underground movement, people helped others,  small and proudly labels, handmade zines, vinyls, raw music, etc...I love the atmosphera around underground death metal in all ways, that made me stick to this
music!
NP: Can you characterize today's death metal scene?
Necroven: Just can I say that is a scene involved in music, I mean that for example black metal, is a movement where sometimes the people pay more attention to corpsepaint or appearance than to music (I like too many black bands, is just a example), and I think Death metal is more a musical movement without care about other things. 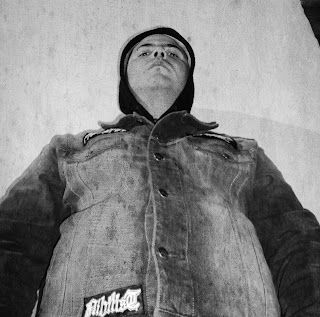 NP: What do you see as the primary difference in mentality between underground metal bands and modern day metal bands?
Necroven:If with modern day metal bands do you mean "big" or "commercial" metal bands I will see more colaborative work in underground, as a big family, but the problem is the money, that would be perfect if we can live of the music, but underground is underground, at the moment I'm happy with my work and I don't change it for a tour in a big bus with bitches, drinks and drugs, I prefered to play in my room an satisfied myself...
NP: What kind of reaction are you expecting from fans for the upcoming demo?
Necroven: At the time people who have been listened it, reacts well, a lot of good reviews and that makes me feel so proud an that gives me desires to continue with this project.
NP: How is the underground scene back there in Spain? We have all heard of the mighty Teitanblood and the likes. Any NOSDM bands worth checking out?
Necroven: I think that we don't have a lot of new bands, for me, a new bands that worth to check would be Ataraxy, Unconsecrated, Banished from inferno...maybe will exist other nice bands but I don't know about.
NP: Thanks a lot for your time. This is your space to say anything you want to. How about a message for your fans?
Necroven: Thank you for give me an space on your blog, and also thanks and cheers for all people who read it.

For the interested people I'll say that for news or whatever they want could contact me through the following address: necrovendeathmetal@gmail.com or visit the new brand page www.necroven.bandcamp.com.